Sumo went to New Orleans last weekend, leaving me home alone for 4 nights. What did I do that whole time?

Well, Thursday night I had class until 10pm, so I pretty much just came home and got on Pinterest, read a little Harry Potter, and went to bed. On Friday, I worked on my lesson plan and got ready for my Pinterest Party. That was fun. 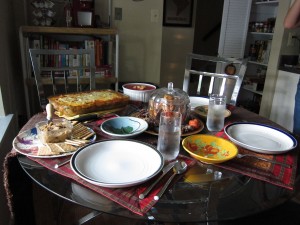 The whole party consisted of foods and crafts we found on Pinterest. Tina made zucchini lasagna, Camilla made this cookie dough dip that is made from chick peas (sounds weird, absolutely delicious), and I made beet soup (I’ll share that later). Further into the evening, during craft time, I whipped up some butterbeer lattes, a la The Three Broomsticks. For the crafts: Camilla worked on a denim quilt, Tina was making wall art for her new Apt, and I made the wreath that is posted before this. 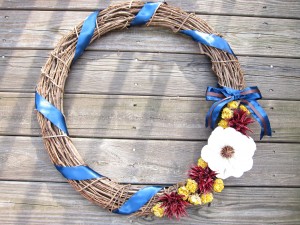 Anwway, Saturday was more lesson planning and leftovers. Followed by Sunday, football and homemade Chinese food. And Sumo bet me that I wouldn’t have Chinese delivered. Ha!

While it wasn’t bad, and I wouldn’t say that I’d never make it again, it was a little lacking.

Chicken Lo Mein
Chicken, sliced thinly in chunks (or just buy a rotisserie one like I did)
Sesame Oil
Packet of Sunbird Brand Fried Rice Seasoning Mix
1 Egg, beaten
Green Onions (I had chives on hand, but no green onions so I substituted)
Soy Sauce
Spaghetti, or other noodle (or rice), cooked 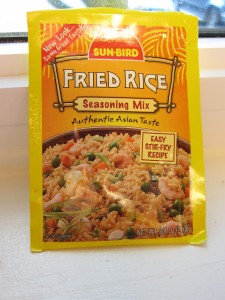 1. Saute chicken in sesame oil until browned. Add green onions, soy sauce,  spaghetti, and Sunbird Seasoning Mix. Mix thoroughly. *** If using a rotisserie chicken, just add the chicken at the end – since it’s already cooked.
2. Push to side of skillet and add egg. Scramble and incorporate into noodles. 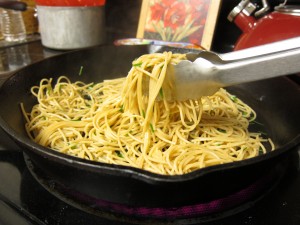 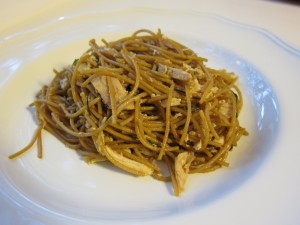 Now, I didn’t have all of the ingredients the back of the packet called for, so maybe that’s why it was lacking. I added extra soy sauce, too. Next time, I think I’d add peas, maybe carrots (those that’s a very large maybe), cabbage – something to give it some pizzazz.

All in all, it wasn’t a bad meal, per say. I would make this again, but only when Sumo wasn’t home and I was craving Chinese noodles but didn’t feel like doling out the cash.