My Friend from Brussels

So, I mentioned a few weeks ago, when the Olympics were just starting, that I made Brussels Sprouts. I don’t recall if I told you how delicious they were, or not.

Either way, I’ve had these dreaded vegetables (is that what they are? are we sure the devil didn’t place them here in hopes that we would eat them and be disgusted?) many times in the past, always with the same outcome – which could be why I hold my views of them coming from the devil.

Well, when planning my Olympics Party, I found a British recipe for these green balls of veg and decided to allow its inspiration to grace my menu. Since everything I had had to be British, and my spread was heavy on the puff pastry, I figured it wouldn’t kill me to serve a vegetable.

I ran into a bit of a snag at the grocery store when I couldn’t find chestnuts – do we only sell them around Christmas? I improvised though: I had pine nuts waiting patiently for use in my pantry.

And let me tell you, either I was wrong about the devil planting these as a low-down-dirty trick, or God was watching over the Olympics. These Brussels sprouts were delicious. Creamy, crispy, slightly bitter (only slightly, I promise), and bacon-y. Who could say “Yuck!” to that?

1. Heat skillet to medium-high. When skillet is heated, add butter, stir until melted. In separate pan, boil sprouts for about 5 minutes. 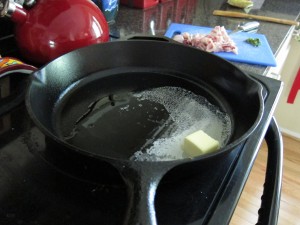 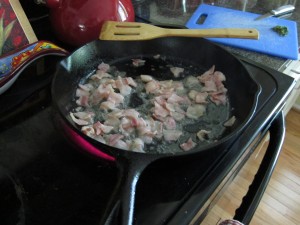 3. Add pine nuts and sage and cook another 2 minutes, continuing to stir. 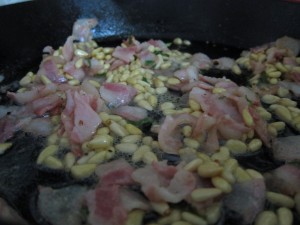 4. Lastly, add the boiled sprouts and the cream. Allow cream to simmer for about 30-45 seconds, then remove from heat. 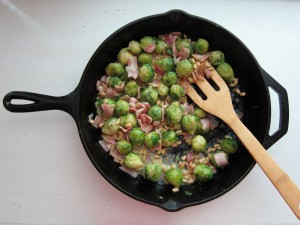 This looked so beautiful, due to its coloring, that as soon as I took it off the heat I had to pop one of them in my mouth. I forgot that I had never liked them. I also forgot that they had been boiling a few short moments prior.

After I got over the burning sensation in my mouth, my tastebuds rewarded me favorably. They were quite happy. I just try to imagine how happy they would have been had I waited the time for the sprouts to cool down properly.

They were so creamy and buttery. The bacon was crisp. The nuts added that bit of extra flavor (and really, pine nuts go so well with pancetta). The sprouts, I must say, weren’t too shabby, either. I’ve actually taken the time to write down what I did, how I made them, so that I can throw this together again, in case I can’t just remember.

But how one forgets something this tasty, I just don’t know. 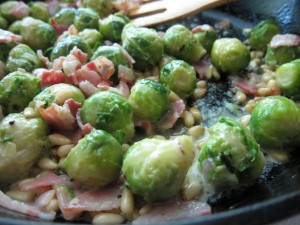