Ok, ok. To be completely honest, I didn’t make this dish in the skillet.

But had the skillet been free, I would have.

I don’t think that helps…

Anyway, last weekend we had the chance to host some great friends who were in town from Massachusetts.  It was fun and I got to cook. Yes, I used the skillet.

While the skillet was preoccupied making a wonderful dutch baby, I started working on the apples that would be our breakfast topping.

Everyone needs this recipe in their repertoire; it’s easy to make and extremely delicious.

So, I know that I didn’t use my skillet to make these, but I could have. And I did use them on top of something I did make in the skillet. And it was good. Really good. I think the only thing missing was a sprinkling of powdered sugar.

And what’s great about this recipe is that it can be used for such a wide variety of things. You could do what I did and top off a dutch baby with it. You could put it on top of a scoop of vanilla bean ice cream. You could pour the apples into cups and top them with granola. The possibilities are endless.

I’ll tell you though, that was one darn good breakfast.

Going back to my normal oatmeal… I don’t even want to finish that sentence. 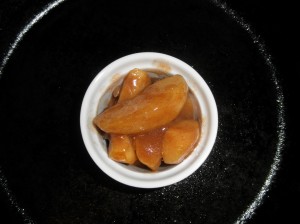 Hi! I'm Chrissy. I'm a 31 year old cast-iron (pretty much) newbie. I'm learning more as I go and screwing up quite a bit along the way. I'm a northern girl (Yay, PA!) who has been transplanted to the south and am trying to embrace becoming a southern lady. Hence the cast-iron pan. I've never made my own biscuits and I have no idea what a dutch baby is. But you can bet that I'll figure all of that out. So stick around and see what happens as I learn the in- and-outs of cooking with cast-iron.
View all posts by Chrissy →
Breakfast, Dessert