Instead, this is being written to inform you of my newest endeavor!

Ok, so about a week ago, Sumo had an idea: “Why don’t we make Friday night ‘pizza night?'”

You see, growing up, my parents, sister, and I always spent our Friday nights at La Casa. La Casa is a Greek pizza place in Lewisburg, PA, and it is known for its pizza (plus, I’ve yet to find a meatball as good as theirs). So every Friday, a few hours after school, we would head over there and meet up with a few other families. La Casa Fridays were a staple of my childhood.

Sumo thought it would be great to start our own Friday night pizza tradition, but we don’t love any of the pizza places around here. So we decided that we would be making our own pizzas.

On Friday morning, I made my list, packed up the baby, and drove to the grocery store where I lazily lingered over jars of pizza sauce – which to buy? Store brand or Furmanos? I know I could make it myself, but, eh, I have a 3 month old.

Since this was Sumo’s idea, and he chose the toppings for pizza numero uno, I had him make it. He rolled out the Pillsbury dough (yep, I went for super easy here), pre-baked the crust, slathered on the sauce (a bit too much, if I might recall), and sprinkled on the pepperoni, black olives, green peppers, and mozzarella. After a short time in the oven, his masterpiece was complete. And a masterpiece it was! 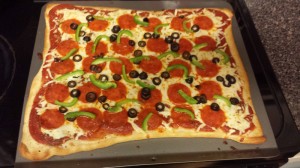 Of course, while chowing down, he had a new idea. “We should have made ice cream, too. We could eat it with the pizza then have it for the rest of the week.”

Well, that did it. I searched high and low (and mostly on pinterest) for different flavors of ice cream. I put together a spreadsheet for the next 52 weeks – yep that’s right, a different kind each week for a year. The spreadsheet includes the date it will be made, the flavor, and the website where I can find the recipe.

So tomorrow will be the first day of the ice cream list. I’ll be making it every Thursday so that it’s frozen by Friday. I’m going to try to post reviews of the ice creams that I make, along with – hopefully –  a few skillet recipes, as well. So stay tuned.

Hi! I'm Chrissy. I'm a 31 year old cast-iron (pretty much) newbie. I'm learning more as I go and screwing up quite a bit along the way. I'm a northern girl (Yay, PA!) who has been transplanted to the south and am trying to embrace becoming a southern lady. Hence the cast-iron pan. I've never made my own biscuits and I have no idea what a dutch baby is. But you can bet that I'll figure all of that out. So stick around and see what happens as I learn the in- and-outs of cooking with cast-iron.
View all posts by Chrissy →
Uncategorized