Never in my life have I ever cooked with tomatillos. I’ve seen them at the grocery store and wrinkled their papery coverings in between my fingers. I’ve even bought tomatillo salsa, or, salsa verde, if you will. But actually removing their skins and slicing through them  was something I had never been inspired to do.

I went to a farmers’ market about a week ago and saw these gorgeous looking tomatillos. I had no idea what I might do with them, but I bought them anyway. I think they were 3 dollars for a quart.

Tonight, I finally decided I’d try something. Here’s what I came up with:

1. Remove and discard skins from tomatillos. In a large pot of water, boil the tomatillos for about 8 minutes.
2. Prepare a food processor or blender with onion, jalapeno, and cilantro. When the tomatillos are finished boiling, add them in and process until mixture is fine.
3. Heat skillet and brown beef. When beef is cooked, add tomatillo mix, sour cream, black beans, and cayenne. Mix thoroughly. Cook until heated through.
4. Place a few scoops in middle of flour tortillas and top with your favorite taco toppings (cheddar cheese, here). 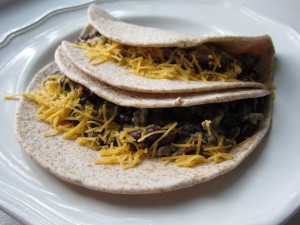 I thought these were delicious and would really like to make them again; though, I think the sauce would go even better with chicken. The beef kinda lost its taste.

Words of advice from Sumo: #1. Only use ground beef for tacos when you’re going to use taco seasoning. And #2. These would work better in a hard shell.