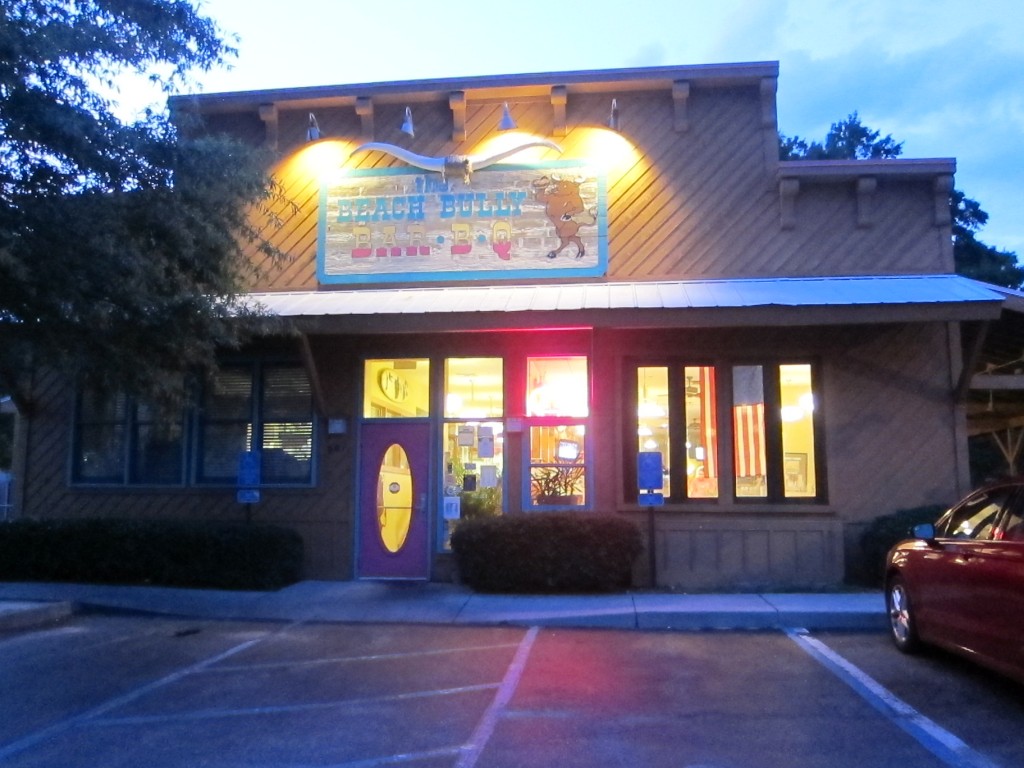 This BBQ joint, about 4 blocks off the beach, made me forget that the sand and surf was just up the road. You walk in and are transported to the Wild West – kinda. The wooden booths have cowhide-patterned cushions, and one of the tables has an actual saddle for a seat, but it’s bright and cheerful with checkered tablecloths and shirts for sale.

And while BBQ is not your typical beach fare, this BBQ made it worth ditching the crab cakes. 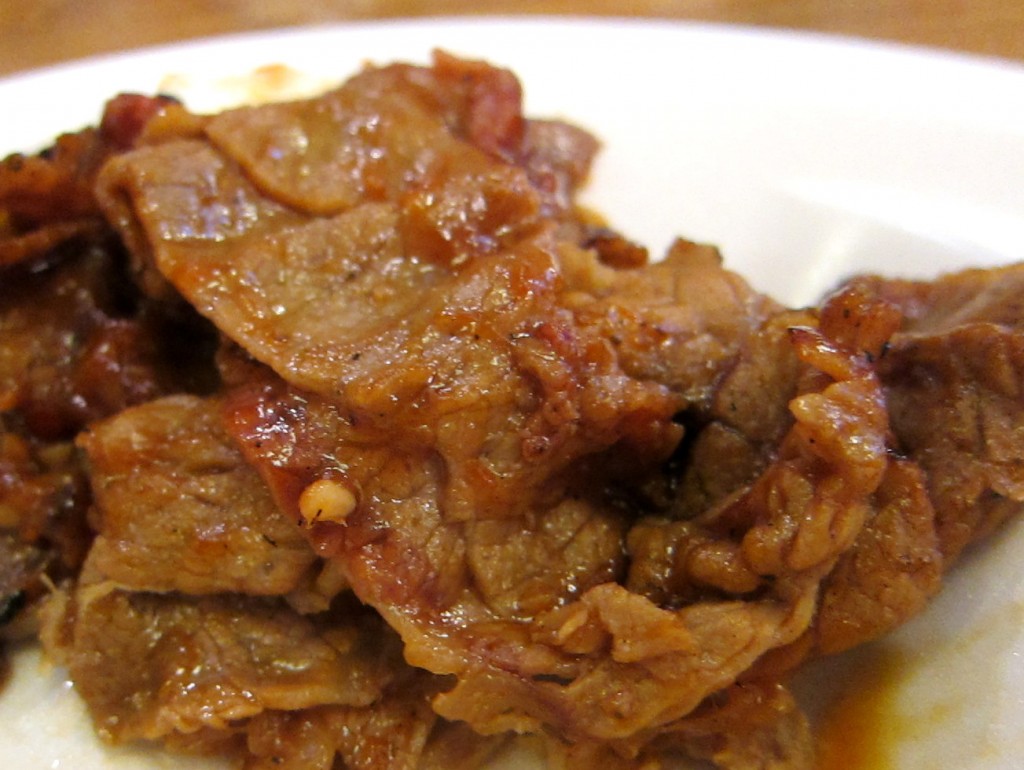 Let’s start with the brisket – thinly shaved and lightly sauced. This might be my favorite brisket I’ve ever had. Sumo felt it had a slight Asian taste to it, but I didn’t pick up on that.

The pulled pork was good, too. But then – I rarely have an issue with pulled pork. Sumo didn’t like it so much, but then, he rarely does. So, we’ll toss it up and sat that the pork was your standard BBQ pulled pork. 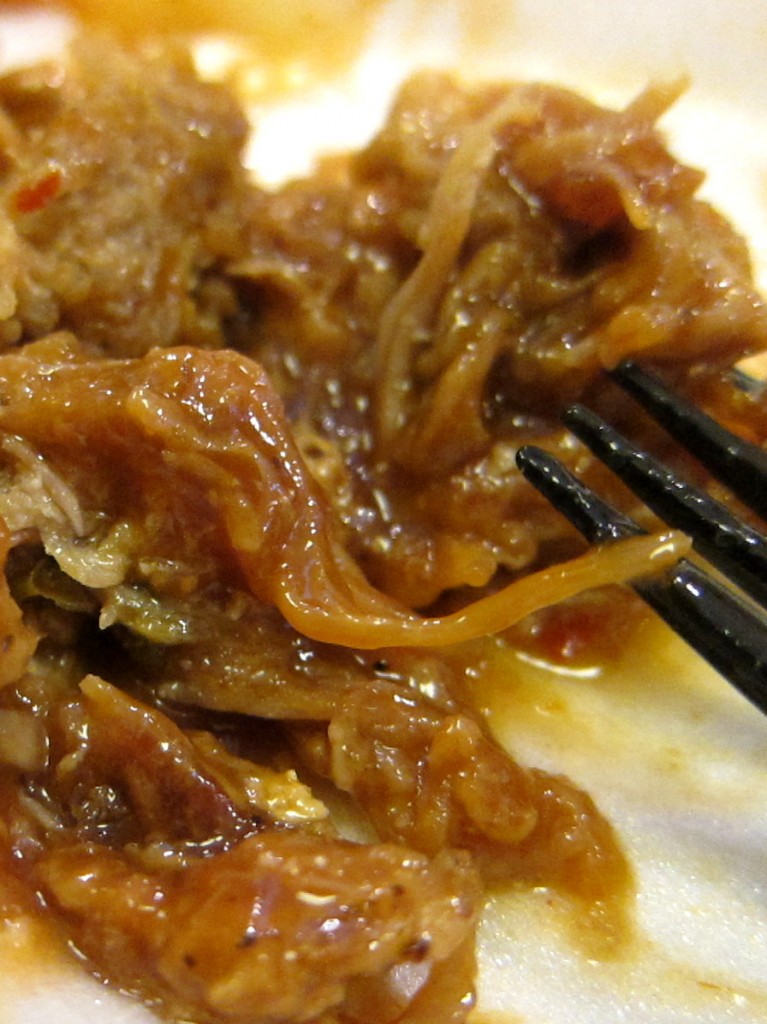 The ribs were very good – meatier than the one’s at Pierce’s Pitt, but a bit lacking in sauce (which was probably a good thing as Beach Bully had a bunch of sauces for you to try out).

The green beans at Beach Bully Bar-B-Q might have actually stolen the show. They were phenomenal. I could have eaten buckets of them. They just had so much flavor (I’m assuming they were cooked in the fat of the pork or something, vegetables just don’t get this close to heaven). Lucy stole most of them from us. At one point, I gave her about 8, then Sumo gave her some, and I gave her more. Sumo said to me, “Did she throw them on the floor? I just gave her some.” I looked, no where to be found. 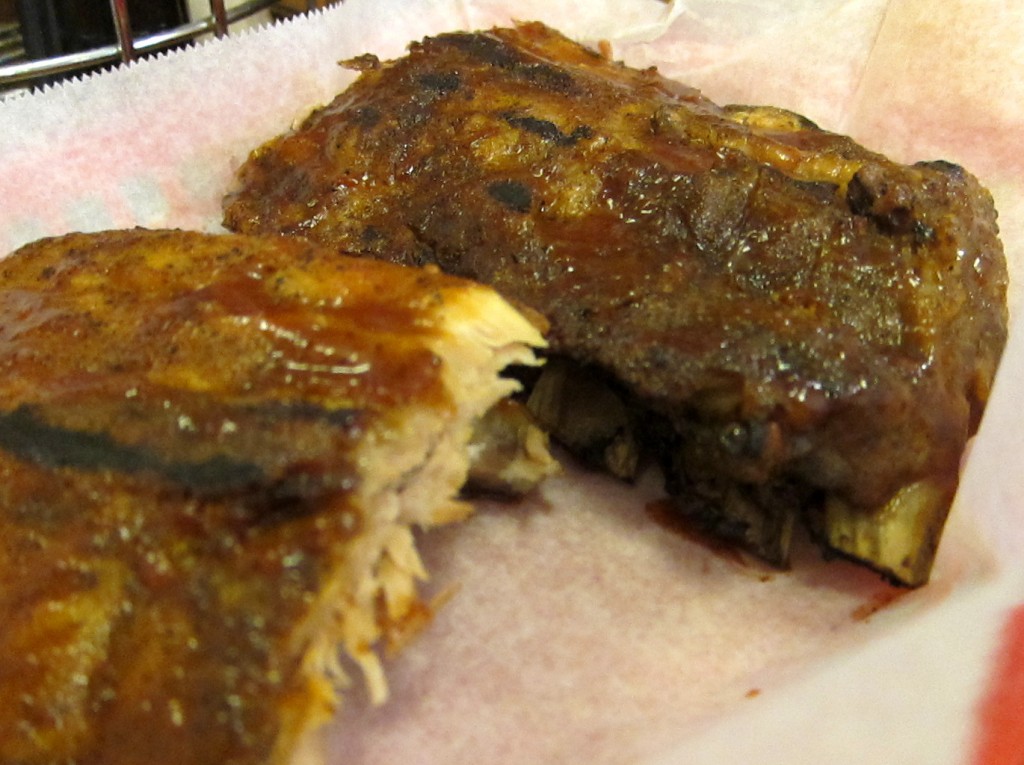 Beefy beans were great, too, and Lucy, once again, stole a lot of them. They were your typical sweet baked beans, only these had some spice to them, and were cooked with hunks of beef and bacon.

And last, but certainly not least, we have to discuss the sauces.

There was House: your typical tomato and brown sugar type of sauce. Delicious.

There was Vinegar: obviously vinegary that the others, but spicy, too. And thick, not runny like many vinegar-based sauces.

There was Mahogany: a deep, smokey flavored sweet sauce.

All three were good and it was hard to pick a favorite. I enjoy mixing sauces to come up with the perfect taste – and for that the Vinegar and Mahogany mixed quite perfectly.

If we hit up VA Beach again next year, I’m 100% certain that we’ll be back to Beach Bully Bar-B-Q.

Hi! I'm Chrissy. I'm a 31 year old cast-iron (pretty much) newbie. I'm learning more as I go and screwing up quite a bit along the way. I'm a northern girl (Yay, PA!) who has been transplanted to the south and am trying to embrace becoming a southern lady. Hence the cast-iron pan. I've never made my own biscuits and I have no idea what a dutch baby is. But you can bet that I'll figure all of that out. So stick around and see what happens as I learn the in- and-outs of cooking with cast-iron.
View all posts by Chrissy →
Non-Skillet, Quest for Q