Last week, I made Creamy Chicken Noodle soup in my new cast iron Dutch oven. It was delicious (seriously, check it out). And, I guess, it was inspiring, too.

Well, I wanted to see if I could make something similar using beef.

And I did. I changed up a few things. Less potatoes, more mushrooms – which wasn’t difficult as the previous recipe had no mushrooms. I switched up some spices and messed with the timing. 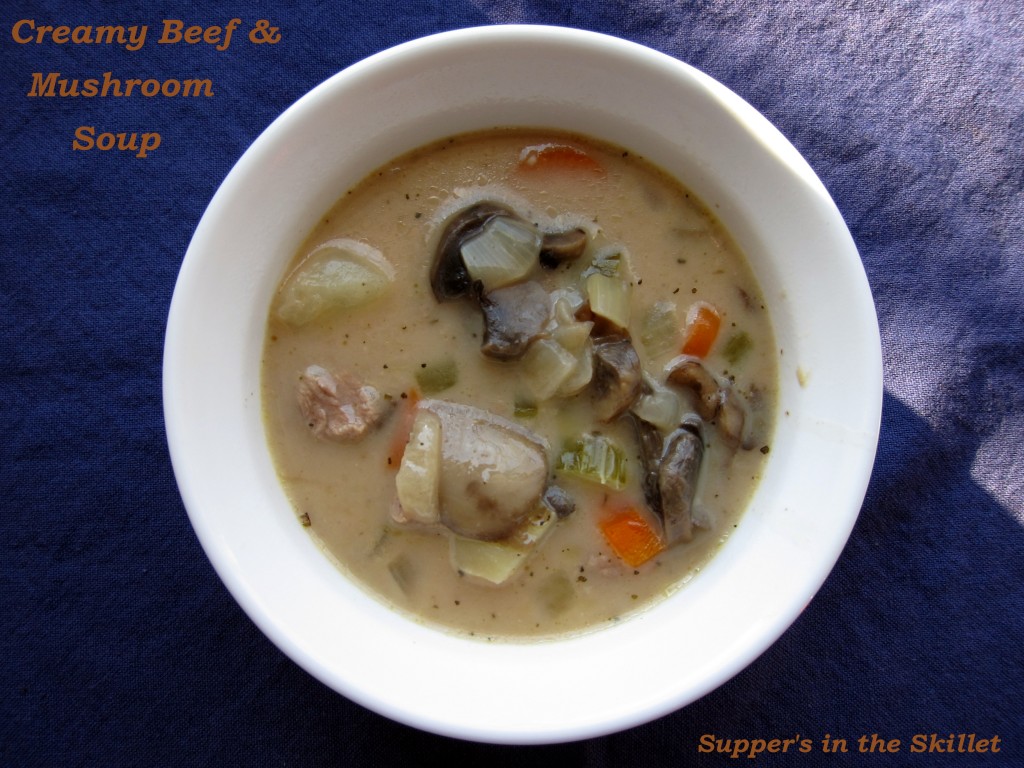 I won’t keep you waiting any longer. Here’s the recipe:

1. Heat your Dutch over over medium high (on a stupid electric stove like mine, I’d say medium high is about a 7). When the Dutch oven is heated, add the butter. Melt.

2. When the butter is melted, go ahead and add the trifecta (onion, carrots, and celery). Mix them in to coat them in the melted butter and allow them to sweat for about 5 minutes, stirring occasionally. 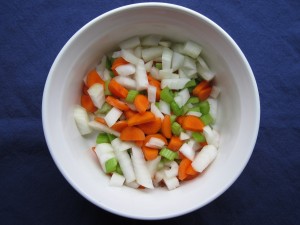 3. Add mushrooms and garlic. Stir for 1 minute before adding potato and beef. . 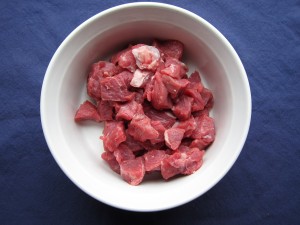 5. Add evaporated milk and cornstarch/water mixture and continue to simmer for 10 minutes. Serve and enjoy.

I wasn’t sure how this would turn out. Creamy chicken soup sounds delicious. Creamy beef soup – I wasn’t so sure. But I was more than pleasantly surprised. It was delicious. The broth was so flavorful – I didn’t know that much flavor could come from a bit of sage and a few bay leaves. 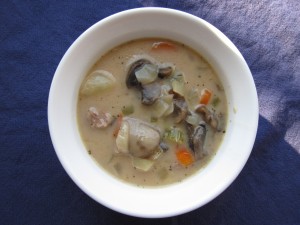 Not only was it delicious to eat, but it was rather easy to make, too. It took maybe 15 minutes of prep time, mainly just chopping the vegetables (and unwrapping those blasted bouillon cubes). Then it took about 40 min to throw together.

Lastly, it was pretty inexpensive. The only ingredients I didn’t already have were the mushrooms and the beef cubes – which I picked up at the grocery store for less than 7 dollars. And it feeds about 8. 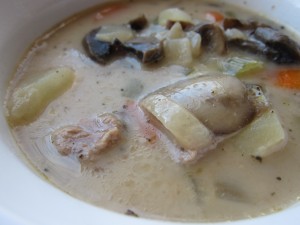 Hi! I'm Chrissy. I'm a 31 year old cast-iron (pretty much) newbie. I'm learning more as I go and screwing up quite a bit along the way. I'm a northern girl (Yay, PA!) who has been transplanted to the south and am trying to embrace becoming a southern lady. Hence the cast-iron pan. I've never made my own biscuits and I have no idea what a dutch baby is. But you can bet that I'll figure all of that out. So stick around and see what happens as I learn the in- and-outs of cooking with cast-iron.
View all posts by Chrissy →
Lunch